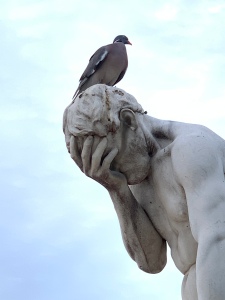 I took this picture last week in Paris, walking through the Jardin des Tuileries with my family, just outside the Louvre.

As we explained here, California seems likely to pass a bill that would rewrite California law in a way that will instantly convert many — perhaps most — independent contractors into employees.  The bill would take the ABC Test created last year in the Dynamex case and apply it to the entire California Labor Code, as well as to state unemployment law. (Currently, the ABC Test applies only to state wage and hour claims, and a more neutral balancing test applies to other state law claims.)

The law, if passed, would undoubtedly fuel new claims against Uber and Lyft, alleging that ride-share drivers are employees under state law.

In the opinion piece, the companies argue in favor of legal reform, but in a way that does not threaten to change drivers into employees.

The Uber-Lyft proposal would secure three new types of protections for ride-share drivers, while safeguarding their status as independent contractors. The proposal would:

So why can’t Uber and Lyft just do these things on their own? Because if they did, the current legal system would likely treat those acts of goodwill as evidence that Uber and Lyft were treating the drivers as employees.

Current labor laws were not written with the gig economy in mind. The law right now is an all-or-nothing proposition — independent contractor or employee. The modern economy, though, requires a middle ground — an alternative that allows app companies to provide greater benefits and protections to drivers without running the risk that these well-meaning gestures could convert the drivers into employees.

Pigeons are going to poop on statues forever. Marble heads provide a comfortable spot for loosening the ol’ avian bowels, and we all know it’s hard to find a good public toilet these days. But some things should not be set in stone. Let’s hope the California assembly backs off of the fast track for A.B. 5 and instead tries something new. The system proposed in the joint Uber-Lyft opinion piece would help drivers and would help the gig economy continue to thrive.