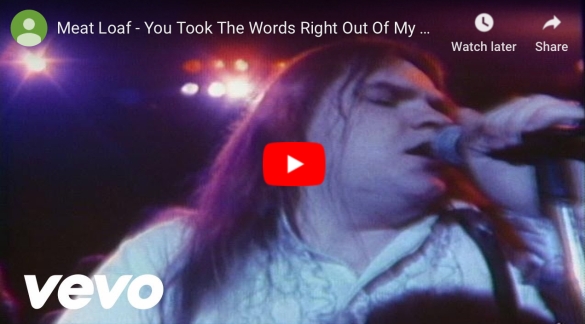 Meatloaf’s “You Took the Words Right Out of My Mouth” opens with a dialogue by Jim Steinman, who wrote the song, and actress Marcia McClain, who played Dee Stewart in the soap opera As the World Turns. He asks, “On a hot summer night, would you offer your throat to the wolf with the red roses?”

For a quick trip back to 1978-79, listen to the album version, not the shortened single, which cut out the dialogue, presumably because it distracted the roller skaters. The song is about teenage lovers and passion, and the lyrics are rich with intense imagery.

Offering a new twist on this old classic, the Supreme Court last week issued a ruling on arbitration agreements that can be paraphrased as “You took the words right out of the air because they weren’t in my arbitration agreement.” This decision will inflame passions in the pro-worker camp, but it’s a good decision for businesses. The case is called Lamps Plus v. Varela.

END_OF_DOCUMENT_TOKEN_TO_BE_REPLACED

In the Biblical story of Noah’s Ark, a world-engulfing flood destroys everyone except Noah, his family, and his mini zoo. A similar story appears in the Quran, and a much earlier world-engulfing flood was described in the Epic of Gilgamesh, a Babylonian poem dating back to the 19th Century BC, featuring Utnapishtim as our hero, a fellow who was awarded with immortality but whose name (unfortunately, IMHO) appears much less frequently on the Social Security Administration’s list of most popular baby names than our more recent pal, Noah.

A more recent trend in flooding comes from our friends in the plaintiffs’ bar. A popular tactic by companies wishing to avoid class action misclassification lawsuits has been to require independent contractors to sign arbitration agreements with class action waivers. These agreements force misclassification clams into arbitration on an individual basis, where each individual single claim has little value. By forcing claims into individual arbitration, there’s much less incentive for plaintiffs’ lawyers to take these cases since each case is worth very little. It’s only in the class action arena that these claims are worth big money.

But according to a recent article in Bloomberg Law, some of the larger, more organized plaintiffs’ firms are fighting back by flooding companies with mass arbitration filings. END_OF_DOCUMENT_TOKEN_TO_BE_REPLACED

Regardless of your politics, I think we can all agree that the best part of Election Day being over is that there will be no more political ads for a while. You know what I mean: “Candidate A hates you and your family and supports legislation to tax you into bankruptcy. I’m Candidate B and I approve this message.” Or, “Candidate B hates you and your family and supports criminals and gangs. I’m Candidate A and I approve this message.” Finally and mercifully, that’s going to end for a while.

So let’s look ahead to 2020, when another vicious round of political ads will be unleashed upon your television screen, punishing all who have not yet cut the cord.

With the Democrats taking control of the House, and with several key Republican seats expected to be in play in 2020, a Democratic presidential win in two years could mean that the Democrats enter 2021 in control of both houses of Congress and the Executive Branch.

A bill recently introduced by prominent Democrats provides a hint of what would happen to recent wins for businesses in the areas of employee arbitration agreements and class action waivers.

H.R. 7109, the Restoring Justice for Workers Act, would prohibit class action waivers in employment contracts and would prohibit agreements to arbitrate future claims. The proposed law would roll back the Supreme Court’s recent Epic Systems decision and shift the balance of workplace power back toward employees.

According to a study cited in Justice Ginsburg’s dissent in Epic Systems, about 65% of companies with more than 1,000 employees have mandatory arbitration agreements. These contracts would become void.

The bill would also increase the stakes for businesses that use independent contractors. If employee arbitration agreements and class action waivers were unenforceable, then the determination of Independent Contractor vs. Employee becomes even more important. A misclassified contractor (who is deemed to be an employee) could then bring class action claims in court, rather than being restricted by contract to seeking an individual remedy through arbitration.

The bill has no chance of passage in the current Congress, but a tsunami of pro-worker legislation may be coming after the next couple of years.

Meanwhile, enjoy the resumption of TV ads about erectile dysfunction and drugs that you should ask your doctor about even side effects include rare incurable cancers and in some cases death. These are the ads we know and love.

Did that photo make you want to eat a pumpkin right now? (Probably not.)

Does this one 🍺 make you wish the workday was over?

Fortunately for those who like instant gratification, driving services like Instacart promise to connect you with contractors who will go grocery shopping for you and will deliver the bounty to your house. This is not an ad for Instacart, though. This is a post about arbitration.

One of the most significant benefits of arbitration agreements for companies is the opportunity to insert a clause that waives the right to bring any class/collective action claims. All claims must be brought individually — but only if that waiver language is clearly stated in the contract.

Instacart may have had an Oops!

In a pending case alleging independent contractor misclassification, the arbitrator has ruled (preliminarily) that the driver bringing the claim may bring a class/collective action. Instacart said, Whahhh?, and asked a California court to intervene and to rule that the arbitrator was overstepping his authority.

Arbitrators, though, are pretty well insulated from court review. That’s usually a plus, but it can also be a minus. For Instacart, it’s a minus here.

The California court ruled that it has no jurisdiction to intervene. It cannot review that preliminary decision by an arbitrator. Rather, a court can only review an arbitrator’s decision under very limited circumstances, mainly only after there has been an “award.” Instacart appealed but fared no better. The California Court of Appeals agreed.

This decision should serve as a reminder of two important points:

The case is in its very early stages, so we’ll see what happens. But there are some early lessons to be learned here. Congratulations. You made it to the end of the post. Now you can go eat.

The song could describe a national network of independent contractors in the construction field. It doesn’t, but it could. (This is how I think now. Sad. Very sad.)

Thank you, Peter, Paul, and/or Mary for helping me introduce the real hammer for companies that use lots of independent contractors: Arbitration Agreements with Class Action Waivers.

The legitimacy of requiring employees to sign arbitration agreements with class action waivers is under scrutiny by the NLRB and will be the subject of an important upcoming Supreme Court ruling in the Epic Systems case. Regardless of what the Supreme Court decides for employees, however, the Epic Systems decision is not likely to limit the use of arbitration agreements with class action waivers in independent contractor agreements.

A ruling this month by the Sixth Circuit Court of Appeals showed how useful these agreements can be for businesses. In a short decision, the Court ruled that two independent contractors wishing to bring a class action alleging independent contractor miscalssification were barred from doing so because they had signed arbitration agreements with class action waivers. If they wanted to dispute their status, they had contractually agreed to do so only in arbitration, and only through an individual (not class) claim.

These agreements work. If they are well-drafted and include provisions that help make them fair to all parties, they are enforceable in most jurisdictions and can be an effective tool for keeping your business safe from independent contractor misclassification class actions.

Businesses that rely on independent contractor labor should consider using this tool in the morning and in the evening, all over this laa-aaand.