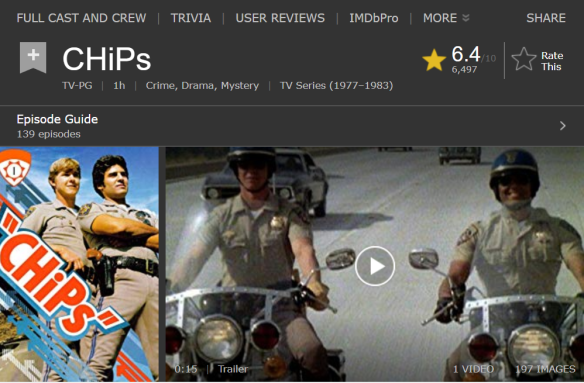 According to IMDb, the highest rated episode of CHiPs was Christmas Watch. Thieves at the community church ran off with a 15th century bell, which meant — according to IMDb — “The Christmas season doesn’t mean any less work for Jon and Ponch!”

Well ho ho ho then. The Christmas season means lots of extra work for lots of other people, including real life police officers. A recent case in the Sixth Circuit Court of Appeals addressed whether police officers taking second jobs are independent contractors or employees.

The test for Independent Contractor vs. Employee under the Fair Labor Standards Act (FLSA) is well-established. It’s the Economic Realities Test, a multi-factor test that seeks to determine whether, as a matter of economic reality, the worker is reliant on the hiring party to earn a living.

But in Acosta v. Off Duty Police Services, the Court of Appeals questioned whether the usual formula should still apply in the modern gig economy, when lots of people take second jobs.

In this case, a private company called Off Duty Police Services (ODPS) retained off-duty police officers to handle private security, flag traffic for events, and monitor locations to be sure nothing was amiss. The work largely involved sitting in the patrol cars and doing a whole lot of nothing.

When the case initially went to trial, the trial court ruled that the sworn police officers were properly classified as contractors because they had another full-time job and therefore were not “economically reliant” on ODPS to earn a living. Makes sense — since that’s the test.

But the Court of Appeals disagreed, finding that in the modern economy, it is common for workers to have more than one job at a time. The court said that modern reality should not weigh in favor of non-employee status. To that I would say, Ok, you may have a policy argument for what the test should be, but the test is well-established. The test asks whether the worker is economically reliant on the hiring party to earn a living. In this case, they’re not. You can’t just go around re-arranging the furniture.

The Court of Appeals, while paying lip service to the six Economic Realities factors, seems to re-imagine how the factors are weighed, tilting the scales to reach a desired outcome for the new economy.

In this case, the officers all signed Independent Contractor Agreements saying they were independent contractors, but the Court of Appeals ignored those agreements.  As we have discussed before, the determination of Independent Contractor vs. Employee is based on the facts of the situation, not what the parties choose to call themselves.

After this case, here’s what you need to remember:

(1) The FLSA definition of employee is intended to be “strikingly broad.” The test is different than the common law test used for determining Who Is My Employee? under tax law or benefits law. More people are employees under the FLSA than under tax, discrimination, or benefits law.

(2) In the modern gig economy, could we be seeing a move toward re-imagining the FLSA test in a way that makes its coverage even broader? Under a re-imagined test, even more contractors may be misclassified than previously thought.

(3) The common refrain of “We’ve always done it this way” is no defense — as ODPS learned the hard way.

Jon and Ponch might not have needed extra jobs, but they also probably had hefty union benefits and a pension. Not so today. Lots of people take second jobs to make some extra cash, and “second jobs” may be the newest target for misclassification claims.

For more information on joint employment, gig economy issues, and other labor and employment developments to watch in 2019, join me in Philadelphia on Feb. 26, or Chicago on Mar. 21 for the 2019 BakerHostetler Master Class on Labor Relations and Employment Law: Meeting Today’s Challenges. Advance registration is required. Please email me if you plan to attend, tlebowitz@bakerlaw.com. If you list my name in your RSVP, I will have your registration fee waived.