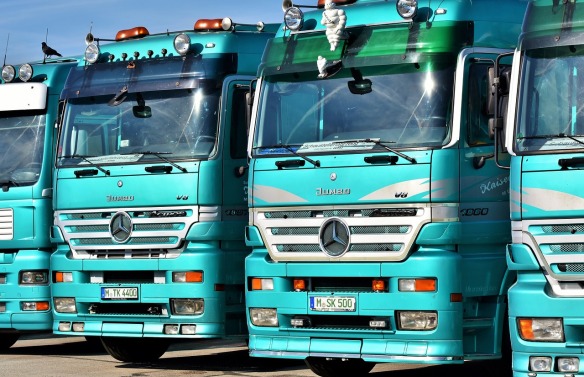 Big Mutha Truckers was a 2002 video racing game in which four sibling truckers compete to make deliveries in fictional Hick County, with the most successful driver inheriting the family business. I had never heard of the game until now, but apparently it  was not very successful and is panned thoroughly by whoever spent precious life-minutes writing a comprehensive Wikipedia entry about this game, time that the author sadly will never be able to recover.

The real life trucking industry has its own problems, and they extend far beyond Hick County. The independent contractor owner-operator model, which has been common in the transportation industry for decades, is under attack. The situation is most critical on the West Coast, and owner-operator drivers are taking action to protect their livelihood — and their independent contractor status.

The Coalition for Independent Truckers announced the formation of a new Independent Contractor Ambassador program. The program’s mission is to protect the independent contractor/owner-operator model in the trucking industry. It aims to educate policymakers, the media, and the general public on the value of the independent  contractor model.

Three recent court decisions will it more difficult for these drivers to preserve their independent contractor status.

Last week, the Third Circuit Court of Appeals ruled that Illinois* state wage laws may be applied to professional motor carrier drivers, even though federal law is supposed to override state laws that are “related to” motor carrier prices, routes, or services.

Earlier this month, The Ninth Circuit Court of Appeals ruled that California’s meal and rest break laws may be applied in the motor carrier industry, despite federal law that seems to pre-empt state law in that field.

The Federal Aviation Administration Authorization Act (FAAAA) prevents states from enacting laws that are “related to” motor carrier prices, routes, or services. It seems hard to imagine that California’s mandatory meal and rest breaks (at issue in the 9th Circuit case) would not affect services and routes. Illinois wage law (at issue in the Third Circuit case) seems like a closer call.

Other federal courts have ruled that states cannot apply their wage and hour rules to motor carrier drivers because of FAAAA preemption. For example, a the First Circuit Court of Appeals previously ruled that Massachusetts’ ABC Test could not be applied to owner-operator drivers, since the state law test was preempted by the FAAAA.

But these new decisions from the Third and Ninth Circuits go the other way, saying that the state laws at issue do not sufficiently “relate” and therefore are not preempted by the FAAAA. These rulings create uncertainty and inconsistency across the industry, with different rules applying to interstate drivers in different locations. That’s what the FAAAA and other federal transportation laws aim to prevent.

Keep an eye on this one. Unlike Big Mutha Truckers, this saga will not be derailed by “repetitive gameplay, dated graphics, and lackluster sound.”

*Not an error. Yes, the case was decided in the Third Circuit, even though it relates to Illinois law.